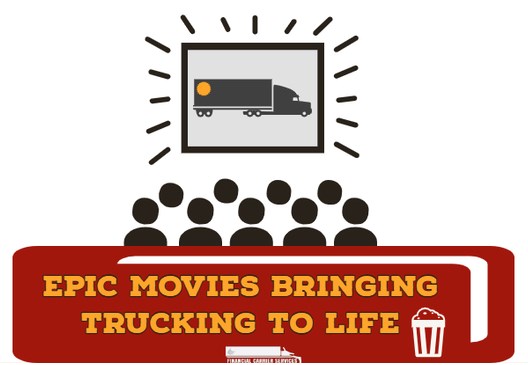 Continuing our Top pick series, we’re looking at some of the best films that have brought the trucking industry to the big screen. Often truck drivers spend long periods of time waiting at yards to be unloaded/loaded or taking rest time on their breaks.  Movies are a great source of entertainment during those off-hours and nowadays they are easily available right from your phone! From old school noirs to popcorn action flicks,  these films are entertainment that brought truckers to the big screen and redefined them to their audience.  Check below as we list some awesome flicks and where you can watch them!

First up we got film noir, ‘They Drive By Night’ (1940), starring Humphrey Bogart, George Raft, and Ann Sheridan; directed by Raoul Walsh

A Chuck Norris flick is next with, ‘Breaker! Breaker!’ (1977) co-starring George Murdock, and Terry O’Connor; directed by Don Hulette

We of course have to include the ultimate trucking-film, ‘Smokey And The Bandit’ (1977) starring Burt Reynolds, Sally Field, and Jerry Reid; directed by Hal Needham

Next we have, ‘High-Ballin’’ (1978) starring Peter Fonda, Jerry Reed and Helen Shaver; directed by Peter Carter

Now is the classic based on the other classic tune by C.W. McCall, ‘CONVOY’ (1978) starring Kris Kristofferson, Ali MacGraw, and Burt Young; directed by Sam Peckinpah

Finally we have the poignant documentary, ‘BIG RIG’ (2007) documentary; directed by Doug Pray

While many factoring companies simply provide basic services, the team at Financial Carrier Services wants to do more. We’re passionate about not only helping trucking businesses grow and succeed, we care about each driver on the road. If you have been waiting on an unpaid invoice, we can help. With our reliable and trustworthy factoring services, you don’t have to wait on unpaid invoices anymore. We offer contract-free services that will get you the funds you need immediately, not months away. In additions, we also provide equipment and tag financing to help move your business forward.  Contact us today to learn more!